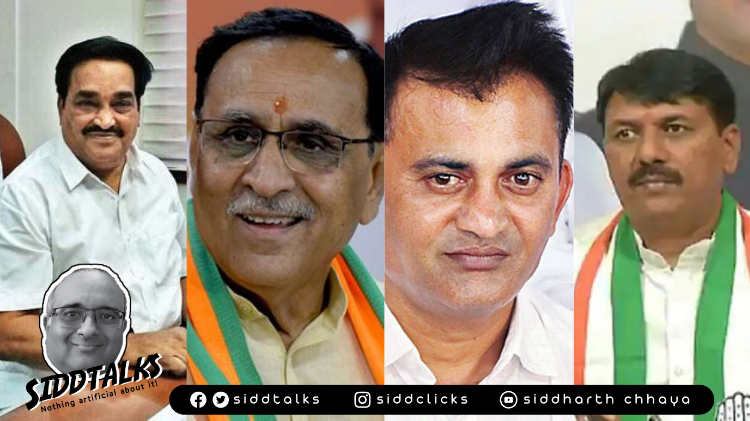 An election season just ended yesterday in Gujarat with the counting for the local body elections held last Sunday. The results were on the expected lines but still they are shocking, to say the least. For the BJP supporters in the state, these results gave them the shock of the ultimate joy, and for the Congress supporters, no matter how many of them still exist; these results have given them almost a knockout punch.

For the Gujarat Congress leaders, if this is not a knockout punch then they must expect or be ready for it for the next year’s assembly elections, scheduled for the month of November/December. If these local body elections’ results are converted into the assembly seats, then it seems that Congress will hardly able to win a single seat next year as BJP is now ruling almost 90% of Gujarat.

The Gujarat BJP won all 6 Municipal Corporations, all 31 Zilla (District) Panchayats, 92.50% Municipalities, and 85% Taluka Panchayats for which the polling was held in two phases. The voter turnout was very less than expected during the Municipal Corporations’ elections and it stood at around 45% overall. At that time the Gujarat Congress leaders and their social media supporters were found an excuse that cities are with BJP maybe but villages are with Congress.

But, if you check the percentage of the seats BJP has won in Zilla panchayats and Taluka panchayats, after almost 65% of the polling in last Sunday’s elections, it is a certainty that even villagers of Gujarat have lost trust in Congress. The reasons for Congress’s heavy decline in Gujarat are many but if one wants to pinpoint a few then having clueless and unimaginative leadership can be one of the main reasons for this heavy defeat. Mind you; even Narendra Modi couldn’t give the Gujarat BJP this big win when he was the Chief Minister of the state so that one can understand the magnitude of this victory.

On 23rd February Congress lost all the 6 municipal corporations but then the Gujarat Pradesh Congress Committee president Amit Chavda and the leader of the opposition in the Gujarat assembly Paresh Dhanani might have thought that they may get a life rope when the other local bodies elections results will be announced and with a good or an average performance they may save their positions. But that was not to be, and Congress plunged to even a greater defeat.

If you are a fan of Indian politics, you can easily see the difference between how the top leadership of both the BJP and Congress work in Gujarat (even at the national level for that matter, isn’t it?). The Gujarat BJP president CR Patil, when took charge last year, during his first speech, without mincing a word, said that his target is to win all 182 assembly seats in 2022. This gave a clear message to the entire BJP cadre in the state on what the future holds for them when it comes to hard work.

After Diwali, CR Patil asked all his party leaders and karyakartas to create, recreate or strengthen their ‘page committees’. All the big BJP leaders, current and past ministers in the state, including the Chief Minister Vijay Rupani, Deputy Chief Minister Nitin Patel, and even the Union Home Minister Amit Shah followed his instructions religiously and made their page committees. This entire exercise probably gave ‘CR’ a clear view of where his party stands in Gujarat and maybe he also got the idea of the strengths and weaknesses of his cadre.

On the other hand, Gujarat Congress did what it does always, the game of waiting and watching. Waiting for the BJP to make mistakes and then cash in and not doing anything imaginative or anything on its own to serve the people. As usual, they must have thought that there is, there will be, or there must be some’ anti-incumbency in voters’ minds, obviously after more than two and half decades of BJP rule in the state, and they will ride on it and win whatever they can. But the funny part of this strategy is that Congress might have forgotten the fact that in 2015 they won more Zilla and Taluka panchayats than Gujarat, riding on Patidar Anamat Andolan, than the BJP, and thus the anti-incumbency is against them and not the BJP.

It is noteworthy that this time the Gujarat Congress was on its own as there was no Patidar factor or any emotional factor similar to it was on the ground to cash in. So BJP’s allegation of Congress won the last local bodies elections only because of Patidar Anamat Aandolan stands correct.

Plus, the Patidar hero, Hardik Patel whom Congress made working president of the GPCC just last year recently in an interview complained against the top Gujarat Congress leadership of ignoring him and his stature and also accused them of insulting him time and again. Although nowadays Hardik Patel’s credibility with Patidars is highly questionable, he is working president of the state body after all and yet he wasn’t given enough importance while campaigning for the entire stint of the local body elections in Gujarat is a fact.

Actually, while the Gujarat Congress was getting trapped in its own anti-incumbency logic, CR Patil made a definite plan to make anti-incumbency against his own government negligible or reduce it to nonexistence!  He made three rules to qualify for the BJP tickets for all the local bodies’ aspiring candidates.

There have been a few instances where one of these rules was compromised but the number of such instances was highly insignificant. What difference these rules made was that it gave more energy to a young BJP worker and a belief that yes even he or she can get a ticket and serve the party and public in general. What difference this did change make to the public of Gujarat? They saw new faces and not the same old ones to whom they may have a problem or complain or two and thus their trust in the party was restored and thus the anti-incumbency was reduced to almost zero.

Whereas the Congress, following the long, old and grand tradition didn’t mind giving tickets to the family members, friends and relatives and what happened? Not less than 8 of its MLAs’ family members and relatives lost the elections. Not only that a sitting Congress MLA Niranjan Patel who was a party candidate on two Nagar Palika seats in Petlad, and lost both of them.

Just like the municipal corporation elections, in these elections also the Aam Aadmi Party (AAP) and All India Majlis-e-Ittehadul Muslimeen (AIMIM) made some inroads in Gujarat politics, but they are limited to certain pockets. As of now and for the next few elections the Gujarat BJP can take them lightly but the very presence of these two new parties in the state can certainly create some headaches for the Congress party because these two parties will take share from the anti-BJP votes and thus Congress may go down further in the state in days to come.

One must also give credit to the Chief Minister of Gujarat, Vijay Rupani for this extraordinary win in Gujarat for the BJP. At the time, especially when he took charge from Anandiben Patel, his working style and ‘so-called incompetence’ were highly criticized even by some of the core BJP supporters. But it seems that he has slowly but surely got control over the administration and has set the right chord with CR Patil as it is obvious that the ruling party and the government do go side by side. Plus Rupani’s image of a simple person and the man next door too seems to have appealed to the voters of Gujarat with great effect.

Ever since the results for the six municipal corporations start coming on 23rd, and till last night, most of the Gujarati news channel debates had one special point to discuss upon and that point was that “in a democracy, we definitely need an opposition.” While discussing this the left-liberal journalists of Gujarat were actually mocking the people of Gujarat that they (the voters of the state) don’t know we know. A few even mocked the people of Gujarat by saying that it seems that the people of Gujarat have no problem with rising petrol and LPG prices and it seems all is well in Gujarat and there is no problem at all.

What these left-liberals are forgetting while mocking the Gujaratis is that it is not the duty of Gujaratis to create or to have a strong opposition, it is the duty of the opposition to give that option to the people of Gujarat. Secondly, the opposition must have the vision and responsibility towards the people of the state or the country to convey it. The voters won’t like that the opposition leaders suddenly start appearing a few days before the voting and then go back to their living rooms after the results are announced and waiting for another election to arrive.

If people have a problem and if the ruling party is not giving any attention to it then it is a moral duty of the opposition leaders to take the initiative and give the voice to people’s concern whether they have voted for them or not. Till yesterday when results were coming in most of the spokesmen from Congress were still blaming the BJP for some flimsy reasons. There was not a single voice of serious introspection from them. They kept on blabbering the issues which failed miserably right in front of their eyes in these elections. One Congress spokesperson was taking pride in winning more than 1000 seats in taluka panchayats and in the resignations of state Congress president and the leader of opposition in the state assembly.

People of Gujarat will keep on voting for the BJP in the coming years, no matter whether they are happy with its rule or not. The simple logic behind this argument is that as on today, they don’t see a responsible ruler in Gujarat other than the BJP, not only because of the way state Congress is (miss)functioning but also there is no credible face to lead the Gujarat Congress. Congress lacks the trust of the people of Gujarat, just like it is in most part of India. Until and unless BJP makes hara-kiri or gives the worst administration or stoop extremely low in character, it will keep on repeating such spectacular performances in many years to come.