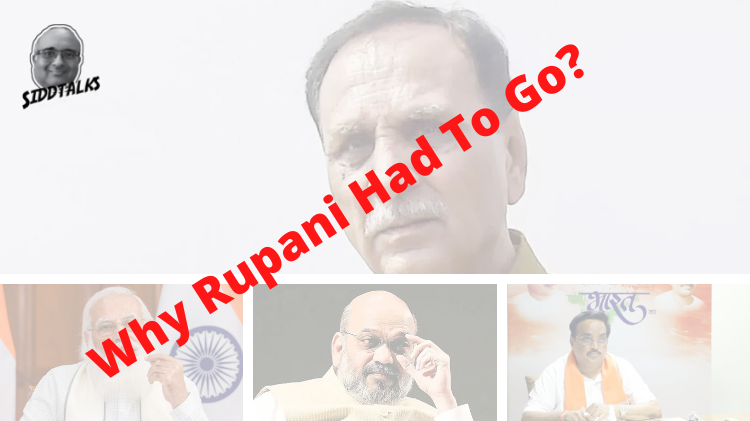 Shocking, unexpected, and speechless! This was my immediate reaction when I got the news of Gujarat’s former Chief Minister Vijaybhai Rupani has resigned on Saturday afternoon. Although I got the news a few minutes late after it got broke on various Gujarati news channels, the amount and the effect of the shock were no different.

It is not that Vijay Rupani wasn’t destined to go or he had immense popularity among the Gujaratis like once Chimanbhai Patel or Narendra Modi had during their respective tenors and yet he had to leave unprecedently, but the timing of the resignation made everyone, including media, caught napping. Although as always the media (and Gujarati media is no different) claimed that they knew about this resignation long back.

When I ponder about Vijay Rupani’s quick exit from the CMO of Gujarat, I get a few points in my mind that could be the reason behind his shocking resignations. Let us discuss them one after another.

Image of a Good Man

Sometimes the image of being a good man can also harm you in a way. Vijay Rupani carried this good man image ever since he became the Chief Minister of Gujarat. But then this image also created doubts in the mind of the people that because he is too good and soft as a person and he can’t be tough and thus his decision making is not strong and swift. People of Gujarat are used to have a strong and decision-making Chief Minister for not less than 14 years during the tenor of Narendra Modi, so for them, Vijay Rupani was quite a contrast.

Lack of Communication and Difference of Opinion

This could be the biggest reason for Vijay Rupani’s surprise exit from the CMO of Gujarat. There have been murmurs about this ever since he became the Chief Minister but they grew in large proportion along with each passing month of his tenor. The last year or so has been the most non-communicated time for Rupani between his government and the party, also between the government and the public. Since CR Patil took over the presidency of Gujarat BJP there have been strong differences of opinion between them as well.

Plus for a few certain occasions, Vijay Rupani has also said, and that too in public that he doesn’t know anything about the matter and people should better ask Nitin Patel his deputy or CR Patil to know the truth. This sent a bad image of him to the public.

This lack of communication was also present between himself and the bureaucracy and that created a very bad image of his.

Bad handling of the second wave of COVID 19

Gujarat was among the first states that imposed a complete lockdown (even before the central government) in the country when the first wave of COVID 19 hit the nation. The handling of the first wave was almost satisfactory but Vijay Rupani and his team didn’t anticipate the second wave in a better manner. As a matter of fact, no other state could handle the second wave differently either, but that doesn’t matter for the public in general, who cried out loud for ambulances, hospital beds, oxygen, and ventilators throughout the months of April, May, and June.

The night curfew did work but not with greater results. To be honest Vijay Rupani must be in a bigger dilemma during the peak of the second wave of COVID 19, because an industrial state like Gujarat, couldn’t have survived the second lockdown after seeing the consequences of what the first lockdown brought. But that brought more and more COVID positive cases and the entire health system of the state was on the verge of collapse.

One must appreciate Vijay Rupani’s resistance not to implement the second full lockdown and that is why Gujarat is fast coming back to normalcy, but it also had an adverse effect on people’s health as well.

Bureaucrats were the Boss!

For last more than a year, and ever since the COVID 19 arrived the fillers coming from Gandhinagar explained there is a sense within the government and the BJP leaders that it is the bureaucrats who are running the show and not the Chief Minister and his team. Certain headless decisions also came from big secretaries and collectors of certain districts not only looked and proved foolish but were almost impossible to implement as well. After passing such foolish and impossible decisions by babus, the Gujarat government, in many cases not even bothered to reverse them, and at the end of the day people suffered, and in certain cases the reversal of such decisions came very late and lost the effect.

In a democracy no matter what people’s representative has the authority to take the final decision or reverse any decision taken by himself or by the babus, and that is why people get out of their homes every five years and vote for them so that the people’s representatives can create a better future for them, but when that didn’t happen in Gujarat, it looked that Vijay Rupani has been ruled by the bureaucrats and not the other way around. For me, this was the final nail in the coffin for Vijay Rupani’s CMship.

We all know that BJP selects even panchayat and corporation candidates on his or her winnability qualities. We also know that Gujarat even today gives the vote to the BJP because of Narendra Modi, the son of Gujarat. After Narendra Modi, only Amit Shah can fetch votes in Gujarat in large numbers, and then there is a huge vacuum. It is not Vijay Rupani’s fault that he is not as popular as Modi-Shah are, but that fact has also gone against him.

BJP won the 2017 Gujarat Assembly Elections by the thinnest of margins but won this year’s Panchayats and Corporation elections with huge and landslide margins. But unfortunately, it was seen as it is not because of Vijay Rupani, it is only because of Narendra Modi’s undented popularity in the state and partially because of Amit Shah’s man-management skills and this isn’t even a secret.

BJP needed someone who can be the face of the 2022 Gujarat Assembly Elections along with Modi and Shah, and somehow Vijay Rupani was not fitting that bill. Hence his exit was imminent, but at the same time, the new Chief Minister Bhupendra Patel is even more unknown quantity than what Vijay Rupani was even for the people of Gujarat. May be Narendra Modi and Amit Shah have seen some fortune in the working style of Bhupendra Patel or they are looking for a snap poll in February-March for the Gujarat Assembly in 2022 and that is why they may have appointed him as a stop-gap Chief Minister of the state.

So, these were the reasons according to me why did Vijay Rupani resign as CM before the 2022 Gujarat assembly elections.

At least a decade ago I saw ex-Israeli Prime Minister Benjamin Netanyahu become the foreign minister of Israel and also saw Russian President Vladimir Putin become the Prime minister of Russia. Both accepted to...

While I am writing this, Eknath Shinde is still in Guwahati, Uddhav Thackeray is still pleading with Shiv Sainiks to remain with his fold, Maha Vikas Aghadi leaders are still meeting with each other,...

I saw a Facebook post a day before yesterday. It was about Agnipath Yojna, and the soul of that post was that the violent opposition to a policy decision by the government that can...