Leeds Test: Caution is the Key for Team India 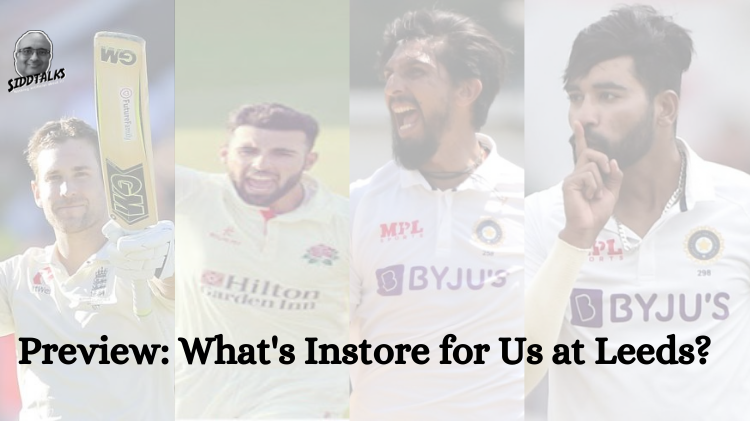 A sensational win at Lord’s (as Harsha Bhogle would have described it) will definitely raise the morale and the enthusiasm of Team India for the upcoming Leeds Test at Headingley. On the other side, England must be licking their wounds even today after three days have already passed since their unlikely defeat. Former English players, sports journalists, and commentators have come down heavily on English cricketers for the way they snatched the defeat from the jaws of victory at the historical Lord’s Cricket Ground.

The same people were ‘slapping’ their chest on the fifth morning of that Test that England is the ‘only favorite team’ to win it. But, we all know what happened afterward and India came out as a surprised winner. Perhaps at that moment of time, those English pundits were not aware that the English cricketers were more interested in injuring Jaspreet Bumrah, both mentally and physically, than winning the Test match and that is why the result was so different than their wildest of imaginations.

But now, today Lord’s Test is a passé and the attention must be on Headingley, Leeds where the third Test between England and India will begin from 26th August 2021, Thursday. Both the teams have left London and have reached Leeds already, so fans must also focus on Leeds only and think about what can be in store for both the teams and us, the fans of the Indian Cricket Team.

What should worry the Indian Cricket Team fan is that after what happened in Lord’s our team must not become complacent. The flip side of it is that our cricketers are extremely professional and they know this truth and its repercussion far better than us. Just like the possible win at Nottingham in the first Test snatched by the rains didn’t affect their morale, such a sensational win will not make them any different than what they are at the start of the Lord’s Test. So, they will be ‘at it’ when the Toss will happen at the start of the third Test at Leeds.

England has made or it was forced to make a few changes in its squad because of the out-of-form top order, middle order, and all other possible orders. Their openers Rory Burns and Dom Sibley are terribly out of form, but Burns has hung into his place for the Leeds Test because of his 100 against New Zealand prior to the current series. On the other hand, Sibley along with Zak Crawley (Kent) had to return to his county Warwickshire ‘to gain some confidence’ as per England’s head coach Chris Silverwood. We all know what happens to a player who has been dropped from the national team under the name of ‘gaining the confidence’ and asked to go to the domestic cricket. Until and unless he has a ‘working luck’ his ‘gained confidence’ does no service to him for the return to the national squad in near future. So, for now, Dom Sibley and Zak Crawley must prepare themselves to spend the next couple of seasons at least with their respective counties.

Just like Dawid Malan, who is also making a comeback to the English squad after exactly three years, and if selected to play, will be playing against the same opponent after the said gap. The last time Dawid Malan played in English whites was against India at Edgbaston and was part of that winning team. One would feel that the way English batsmen are struggling from the top to the bottom, leaving Joe Root alone, Dawid Malan has already secured his place in the final XI.

Another player who can find his place in the playing English XI at Leeds can be Saqib Mahmood, the fast bowler. Hasn’t played any Test yet but he has been a part of the English touring teams this year. Plus he has been a part of the England ODIs and T20Is team for a while. Mark Wood has injured his right shoulder during the Lord’s Test (but that didn’t stop him blabbering at Bumrah) has been under observation and if he fails to prove his fitness then Saqib Mahmood will most definitely become the part of the final XI.

What England needs the most or one would better explain that word need as desperation, is their openers start giving them a good start if not a better one. Strange enough Indian openers have done exceedingly well opposite to the expectation in both the Tests till now. But after Sibley’s departure, the question is who will open with Burns, Ollie Pope or Dawid Malan, or the confused No 3 Haseeb Hamid? If England can solve this riddle in Leeds the next two Tests can bring them fewer headaches it seems.

In Moin Ali England has definitely found a solution for a spin option and if English top and middle order fires then Moin Ali will certainly give them a balance they need desperately. At Lord’s Moin show some resistance along with Jose Buttler in the second innings. In the first innings, even Johnny Bairstow looked in ‘touch’. If these three along with Captain Root and two openers can show some substance then they can pose ‘some’ challenge to the confident Indian side.

Road to victory at Leeds, obviously will not be easy for the Indians as well. I was surprised to know when I discover some states that India is going to play at this ground for the very first time in 19 years! Yes after almost two decades of that historic innings and 46 runs victory at this ground in 2002 this will be Team India’s first outing at Headingley, Leeds.

If we talk about the conditions one would predict that things won’t be any different than what they were in 2002. Headingley is known for its gloomy atmosphere and along with clouds; the pitch also assists the fast bowlers, mostly swing bowlers. In 2002 Sourav Ganguly took the bold decision (or played the gamble) by opting to bat first after winning the toss on a gloomy day and yet India registered a heavy victory at that time.

This time weather may remain the same as per the history, but the pitch may be different as per my personal calculations. The simple reason is that in Lord’s itself Indian bowlers were still managing the swing and seam far, far better than English bowlers despite having adverse conditions in the second innings. So the ECB must be varied about Indian bowlers and that may force the groundsman at Leeds to serve a flat pitch, so that at least the English batsmen can be saved from seaming conditions and they have to handle only swing benefitted by the gloomy weather.

But, then this decision may backfire as well because Indian openers are in good form and Cheteshwar Pujara and Ajinkya Rahane have shown their return to their respective forms as well. So if these four favorable pitch conditions make English bowlers pay then England will again have to face an uphill task. Captain Virat Kohli’s form is still a matter of concern but just being a student of this great game, I would suggest that his poor form can be converted into a good one, just by leaving the balls outside the off-stump. His last few dismissals where he got nicked outside the off were on the fifth or sixth stump and he can easily avoid them happening again. One would remember the great Sachin Tendulkar and how he avoided cover drive in an entire inning at Sydney and yet managed to score a double century. Kohli is smart enough to take a leaf out of Tendulkar’s that innings.

There are very few occasions when Indian cricket fans need not worry about their bowling and this tour of England is one of those rare occasions. All our fast bowlers are in great form, including Ishant Sharma who made a return in the last Test. Even if Headingley’s pitch doesn’t help these four bowlers then expected heavy weather may certainly be beneficial for them as they are now masters of swing as well. Along with Bumrah, Mohammad Shami, Sharma; Mohammad Siraj is a revolution not only for Indian fast bowling but also for Indian cricket as well. His ability to take wickets at the correct time has made him even more lethal than the rest. He might have to cut down his enthusiasm a bit but then it is ok as he is keeping on taking the important wickets.

Just a few days before the Leeds Test, India definitely looks favorites to win, but as mentioned earlier they will be cautious too before taking the field on Thursday. One good innings by an English batsman along with Joe Root can force Team India management to think differently in the middle of the Test and that could turn the table for sure.

It is a famous cliché in Test cricket and often used by the commentators, especially on the final day of a Test match that “all three results are possible”. The same three options were...

Favorite Cricketers? Here are my top 5 whom I have loved so much!

Cricket! The word is enough to give excitement, goosebumps, and a different kind of emotions all together at once to any die-hard cricket fan. Just like me, there are many in this country who...

Team India and England both have plenty on their plates

When the Englishmen won the first Test at Chennai no one would have thought that the remaining of the Test series will be one-way traffic. Blame it on pitches or incompetence of the English...