Gujarat Assembly Elections 2022: AAP is already active what about others 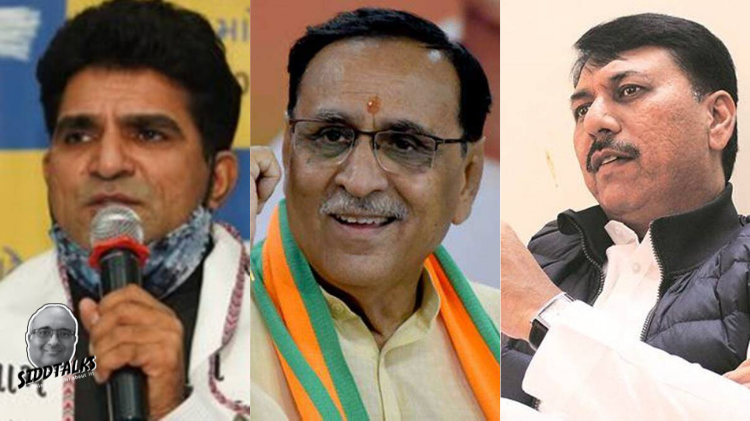 For the last 20 years, or in other words ever since Narendra Modi became the Chief Minister of Gujarat, the Gujarat Assembly Elections take place in the months of November-December every five years. This time around also these elections will be conducted next year during the same months. But, the Aam Aadmi Party or AAP’s recent activities have already started the discussion among the pundits of Gujarat politics about these elections and that too almost 18 months before.

There can be no second opinion that Gujarat has been BJP’s proud fortress for more than two decades now. What more special Gujarat makes itself for the BJP is that the people of the state have given all 26 Lok Sabha seats for the last two consecutive elections. So, the stakes are always high whenever an election happens in the state. In the last four years, we have witnessed that even a local body election or a by-election of some remote assembly seat also attracts national media’s attention, so one can understand how the Gujarat Assembly Elections matter for everyone not only locally but also at the national level as well.

The last time around, that is in the 2017 elections, BJP almost survived the heartbreak by winning 99 seats out of 182, just 7 seats more than the required for the majority in the Gujarat Assembly Elections. At one point in time, while results were coming out, even Congress was leading the seat tally in trends. It was a clear effect of the Patidar Anamat Andolan and that is why BJP had to satisfy with the number of seats it got. There were many seats where the winning margin was around or even below 3000 votes.

In the last four years, the state BJP leadership has somehow managed to get a good number of Congress MLAs to get resigned first from their membership of the Gujarat Assembly, fight the by-elections under BJP ticket, and win them. That has put the BJP in a comfortable position inside the Gujarat Assembly as its number has increased dramatically in the last four years. In response the Gujarat Congress has only played the victim card and never done soul searching after every incident of its MLA switched the sides.

If 2017 was the elections conducted under the effect of Patidar Andolan and the influence created by Hardik Patel’s PAAS (Patidar Anamat Andolan Samiti) on the majority of Patidar or Patel seats of Gujarat, this time around, though 18 months still to go, COVID-19 situation in Gujarat or handling of the Chinese virus by the state BJP government will be a big election issue.

Gujarat cannot be single out where people are angry in general against the respective state governments due to COVID-19 handling or mismanagement of it. Almost every state has suffered badly because of this Chinese virus and lakhs of people have lost their loved ones due to the havoc it created especially during the second wave. No matter whether the number of deaths was high or low in a particular state, people, in general, see their state and the center governments as the main culprits.

So, the anger against the Gujarat BJP government can be still felt on the surface even when the second wave has been gone forever it seems and everyone is waiting for the third one with utmost fear. In India, it is said that public memory is very short. If we go by this philosophy then the Gujarat BJP can only hope that the third or fourth wave of COVID-19 would never come, or if at all it has to come, it doesn’t create the similar situation that the second wave created. Because god forbid if a deadly third wave of COVID-19 does arrive then that memory may last in people’s mind till Gujarat Assembly Elections arrive next year.

Any defense of the state government that says that the public at large is also equally responsible for bringing another wave of COVID-19 will not work; no matter how true that may be, for the state BJP. When all the political parties were busy doing rallies during the local bodies’ elections early this year, you can’t advise the public to stay home and follow the rules to keep Corona away. Plus like the national media, most of the Gujarati media too is biased against the BJP and it has created a strong perception in the public’s mind that when people die due to COVID-19 only the state and center governments are to be blamed for the ‘inefficiency’, and not them, no matter how they partied around on beaches, in gardens, in public places or in restaurants once the first wave of Corona got under control.

This public perception will hurt the state BJP big time in the upcoming Gujarat Assembly Elections so as mentioned above only the absence of the third way or low intensity of it can change this perception based on short public memory philosophy. On the other side if the state government prepares the medical facilities across the state which can fight the possible third wave with precision then all the mistakes it has been done by it during the second wave can be forgotten easily. But then the problem with Corona waves is that the intensity can’t be predicted and thus any preparedness can look incomplete when the actual wave is making rounds. Although Gujarat is maintaining a high ratio of vaccination for the last many days and one can hope that it will help to keep the check on that third wave with less hospitalization.

Although the Gujarat Assembly Elections are far far away at this moment and just like everywhere else in India, in Gujarat too the BJP has a strong cadre base and it can prepare itself for the elections in time. But the way Aam Aadmi Party or AAP has started to cement its base in Gujarat, the Gujarat BJP must look at these events closely with caution. Till now AAP had no leader that has a mass appeal, but slowly but surely it is gathering known and influential people into the party.

First Isudan Gadhvi the well-known face of Gujarati media left his job at VTV Gujarati and joined AAP and just yesterday known realtor in Surat Mahesh Savani also hold the hands of AAP in presence of Manish Sisodia. One would doubt the capabilities of Isudan Gadhvi as a politician but Mahesh Savani can certainly pose a challenge to the BJP in the upcoming Gujarat Assembly Elections if AAP decides to fight elections under his leadership. It is learned that Mahesh Savani had wished for a Lok Sabha ticket from Surat from BJP but was denied and hence he will have revenge in his mind for sure.

Other than that, Mahesh Savani is known for his social services as well. He is conducting mass marriages of poor and orphan girls and gifts them basic utensils, jewelry, and financial help every year in his home town Surat. He was also a mediator during the Patidar Anamat Andolan for PAAS and the government of Gujarat hence his influence within the Patel fraternity can be imagined easily. For AAP Gujarat this is just a start and in the coming months, we may see more and more known and influential faces may become part of AAP Gujarat.

But, will these influential faces be able to convert their good name into votes in favor of AAP? That will only remain to be seen. So many big names can also create fissures within the party. There are many leaders who are part of AAP for the last four years now, may want a greater role in the functioning and if they are denied and that role is given to the new but influential people then this new political outfit in Gujarat can fell apart even before the Gujarat Assembly Elections have arrived.

In all this, the biggest loser will be Gujarat Congress for sure. It has already become a dead duck in the state and with Hardik Patel who joined the party just a few years back becoming the working president has made many senior Gujarat Congress leaders go further inactive. The loss of Ahmed Patel would also be great for the party. Plus as said before, even after giving a tough fight to the BJP during the 2017 elections Congress is back to square one as it lost so many MLAs in these four years.

With AAP’s activities in the last few weeks and its show in Surat Municipal Corporation elections, Gujarat Congress should worry more than before. The history of Gujarat politics suggests that a third party has never been successful in winning elections in Gujarat with one or two exceptions may be. It is obvious that in the 2022 Gujarat Assembly Elections the anti-BJP votes will be shared between many other political parties including the Congress and AAP.

If this year’s local bodies elections are anything to go by Congress will face a stiff challenge to save its core voters not only from AAP but small parties like AIMIM, BTP and NCP as well. AAP did well in Surat and AIMIM did extremely well in Ahmedabad, but mostly in the Muslim areas. Not only that AIMIM later succeeded in capturing the Godhara municipality by taking the support of majority corporates. So, one can easily predict that in Gujarat Assembly Elections 2022 Gujarat Congress will be on a tricky pitch and probably will be more clueless than ever before.

With such an election scenario ahead the Gujarat BJP can breathe easy, but certainly, it can’t remain complacent. With new waves of the Chinese virus looming large always it will keep the state BJP leadership on their toes and they will be forced to send a strong message to their cadres to remain with the public and make the image of the BJP intact. Yes, there is a huge core voter base for the BJP in Gujarat but again, nothing can be predicted with ease at this moment of time.

18 months before the Gujarat Assembly Elections the picture looks good for the BJP and enthusiastic for AAP, but then one and a half years is a long time in politics when even 24 hours can damage any political mathematics. All in all, we are in for some interesting politics in the coming months in Gujarat.