Team India and England both have plenty on their plates 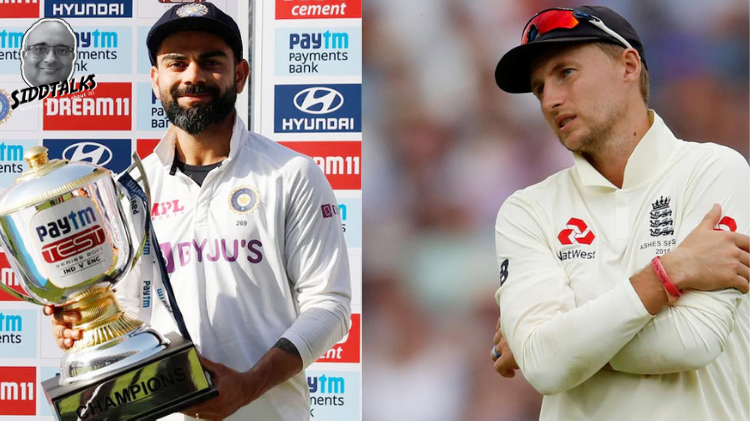 When the Englishmen won the first Test at Chennai no one would have thought that the remaining of the Test series will be one-way traffic. Blame it on pitches or incompetence of the English batsmen and bowlers; it was kind of an easy ride for the Team India in three Tests out of four. When the series started many of us thought that England can provide the biggest and toughest challenges to Team India in recent times, as they just won a series against Sri Lanka on turning pitches.

As mentioned above England was looking to prove the point when they bossed the first Test at Chennai but then they fizzled out slowly but surely on turning tracks. As per personal opinion, the first and last Tests pitches were not giving that big turns and because the Englishmen were on a high after winning a series in Sri Lanka they played some great cricket in the first Test, but then they hit a mental block as they lost the next two Tests and hence that mental block made them think negative about the pitch served to them for the fourth and the final Test as well as the main reason behind their lackluster performance in last three Tests.

Although Team India won three Tests in a row easily after a heavy defeat in the first Test and also booked their place in the first-ever ICC World Test Championship finals, there is plenty to ponder about for them especially on their batting. This Test series win is no less than bowlers’ hard-earned victory and one must make a strong note about it. Apart from Rohit Sharma and Rishabh Pant, not a single top or middle-order batsman from Team India could register an average of 30 or above in the entire series.

Rohit Sharma finished with an average of 57.50 and Rishabh Pant had a great series with an average of exactly 54 runs per innings. Both of them scored centuries at very critical moments which made the difference in the end. Even Washington Sunder ended with an astounding average of 90.50, thanks to his 96 not out yesterday. But if we check the averages of others and the mainstay of Team India’s batting order, Subhman Gill had an average of 19.38, Cheteshwar Pujara 22.16, captain Virat Kohli 28.66, and Ajinkya Rahane had a very low average of 18.66 in not less than seven innings they played.

It is not the averages that are worrying signs, but it is their inconsistency that can give jitters to any big fan of Team India who can think beyond the upcoming T20Is series, ODI series, and ICC World Test Championship finals. One must remember that India is going to be on the reciprocating series tour later this year and with this inconsistent form from the top draw it is highly likely that the Englishman can enjoy taking sweet revenge by even whitewashing the Indians.

For the last many innings Team India has not registered a century opening partnership.  We tried Mayank Aggarwal and Shubhman Gill with Rohit Sharma at the top order but none of them gave us the impression that they will be consistent with the hitman. Gill did extremely well on Australian pitches, there is no doubt about it, but on home pitches, he looked like a dead duck. Out of 119 runs, he scored in four Tests fifty of them scored in a single inning. If Gill was looking promising in Australia, he was looking totally out of the place in India.

Team India can worry a lot about the inconsistency of its Test vice-captain Ajinkya Rahane and the ‘anchor’ Cheteshwar Pujara. Although captain Kohli’s average was no different than both of these batsmen at least Kohli showed some metal in two innings in particular against England.  Rahane’s last 15 innings have seen just one century and one half-century with an average of 29.23 against his career average of 41.28.

Cheteshwar Pujara is no different as well. He had score four half-centuries and no century in last eight Tests he played. He scored his runs at an average of 28.85 which is even less than of Rahane’s. There is no doubt that he was one of the architects of India’s historical win against Australia in Australia, but the speed he scores his runs causes doubts of his mental presence. Both at Chennai and Ahmedabad, Pujara got out many times to the spinners by not understanding the spin, which used to be his less discussed point. Pujara always used to use his legs well while playing spinners but in this series somehow most of the time he stuck to the crease and gave away his wicket to the spinners.

One may think that the Team India management might ask Lokesh Rahul to replace Rahane and stick with Pujara, at least for the return series to England in June. Or Rahane could get a chance to prove himself in the ICC Test Championship final and then his fate for the England series will be decided based upon that performance. But then stakes are always high when you are playing any final of any format and thus experiments or giving someone a chance is a big no!

Unfortunately, the captain of Team India Virat Kohli is in the same line as well. Due to COVID 19 restrictions and then parental leave, Virat could play only five Tests in the last twelve months. In these five Tests, Kohli’s average is 31.25 against a career average of 52.37 and his highest score is 74 which he made in the first innings of the pink-ball Test at Adelaide. But you can’t even think of dropping the captain, don’t you? As of now, Virat has no competition as far as captaincy is concerned but his captaincy skills are always under the scanner when there is a bit of pressure put on by the opposition. If Team India is doing well, Virat is also doing good in the various captaincy departments, but when Team India is not doing well just like it did in Adelaide or in the first Test at Chennai against England, Virat’s captaincy was found wanting. Probably the result of the Test series against England in England may put this discussion on Virat’s captaincy to the rest for a while, but he is definitely not in lines of the greats like Sourav Ganguly and Mahendra Singh Dhoni, despite the statistics show otherwise.

As mentioned before this has been the bowlers’ series and Ravichandran Ashwin and Axar Patel just ran through the English defense without any trouble. Ashwin rightfully got the man of the series award for his 32 wickets performance and also for the century he made in Chennai at a very critical juncture. So far Axar Patel has been a revelation for Team India, unlike Kuldeep Yadav who is also a left armer, Axar can bat well too so he can be in the scheme of things for the series to come and it is now up to him to secure his place all the time.

Having a spinning pitch to bowl on is one thing but bowling according to the situation and pitch is totally a different thing for a spinner. Both Ashwin and Axar bowled according to the demand of the pitch. In the third Test at Ahmedabad, which was also a pink ball Test, the ball was not turning much but was skidding on. None of the English batsmen and many  Indian batsmen couldn’t understand the nature of that pitch but this duo did and that is why India could run away with the win in just two days despite their batsmen gave some pathetic batting show.

For the Englishmen, there is not only plenty to think about their performance in this series, but they also need to change their mindset about the art of spin and spinning wickets. They should stop thinking that turning tracks are untouchable until they have that mindset about these turning tracks, there will be no series win against the quality spin attack and there can’t be any spinner who can run through the opposition for them. England also got hampered by their rotation policy in this series. It is understood that they need to rotate players as they are going to play Tests this year in big numbers. But by resting a player after a match where he performed well, breaks his rhythm.  We saw that with James Anderson and also with Joffra Archer. Joe Root also accepted that they had plenty of chances to win the series, but they couldn’t cash in. The mishandled rotation policy could be the reason behind that as well.

Although Jonny Bairstow hardly has something to show in his entire Tests career, he did well in Sri Lanka but then he was sent back to England for the first two Tests, as a part of the rotation policy, and then he was found out of sorts in the next two Tests in Ahmedabad where he scored three ducks in four innings. On the other hand likes of Joe Root, Ben Stokes and Jack Leach played all four Tests in India and this is where a rotation policy is a big crap in personal view. If you want to rotate players then rotate them all and why you are not rotating your potential match winners? Don’t you think they can also get injured or tired once you play out most of the Tests this year, for which you have installed this rotation policy?

For the last two or three decades, Test series in India are one-sided most of the time. With India’s ability to have a spin battery all the time and their batsmen could score huge runs, Team India used to steamroll the opposition teams during that time. Only twice or maybe thrice the foreign teams could beat India in India in a Test series in the last three decades. Yet, one would think that had England performed a bit better in this series after winning the first Test, Team India, with the poor performance of its top and middle order, had to toil extremely hard to win, if not losing the series.

Surely, testing times are ahead for Team India and certainly for the English team as well in the coming days and we all are here to wait and to watch that unfold before us.

The world has become even smaller after YouTube arrived on our mobiles in a big way. There are plenty of channels created and run by normal people like me and you on YouTube and...

The sorry state of Pakistan Cricket must come to an end

Although the start of a new year shouldn’t have a sorry feeling, nor one should talk about it, these days the topic of the sorry state of Pakistan cricket has been discussed all over...

Why the Bazball phenomenon will not be consistently successful?

Ever since this term Bazball has come into the picture, cricket fans especially fans from India are in absolute awe. Those like me who have seen and experienced the pure form of Test cricket...