Out of Love: What a woman can do when her back is on the wall? 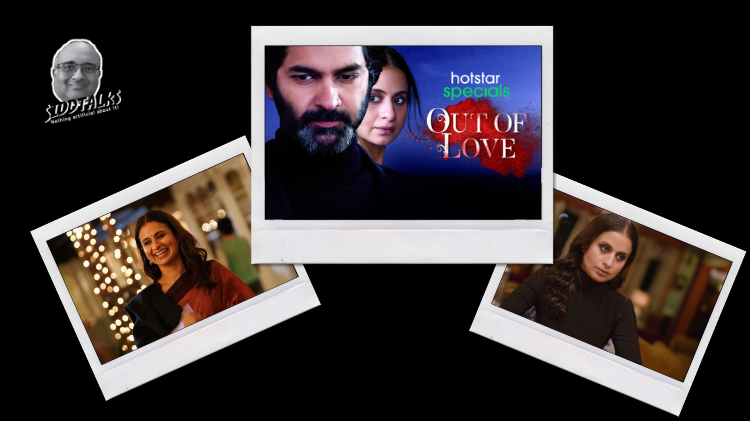 Was contemplating writing on this topic for at least two weeks but it is a mere coincidence that I am writing it today that also happens to be International Women’s Day.  Out of Love a web series on Disney+Hotstar is more than one year old but got time only last month to watch it.

The first impression after watching the series was that it has touched a totally different subject than what is called ‘in thing’ these days. These days most of our web series are based on crime and crime stories, but Out of Love tells you a story about a woman who is struggling to get her esteem back.

Before we move forward one thing I need to clarify is that this is not a review. This article comes under Bollysophy category of this blog, where we try to understand a message or a philosophy which we normally ignore while getting entertained by Bollywood movies, TV series, or nowadays web series, of course, if there is any message or philosophy we may find in them.

Out of Love tells you a story of one Meera Kapoor. She is a doctor in a medical dispensary in the small and beautiful town of Coonoor. Her husband Akarsh is kind of a failed guy. Akarsh is a civil engineer and tries many projects one after the other but because he doesn’t have any business skills or business thinking he keeps on failing.

So, Meera runs the show at home having a son and a dying mother-in-law. One fine (bad in the case of Meera) morning Meera finds a lipstick from Akarsh’s coat for which Akarsh doesn’t have a convincing explanation, and from there she starts doubting him for having an affair, and then the story moves forward.

As said above, this is not a review but this is a conscious effort to understand what Out of Love series tries to convey by showing the mental condition of a married woman who has found that her husband is cheating on her.  We have seen and experienced many such women around us who are going through such mental trauma in our everyday life.

What I have understood from the examples I have seen in my life is that for first the woman who has been cheated by her husband, life partner, can’t believe what she is seeing in front of her own eyes and thus she reacts accordingly.

Although that seed of doubt already been planted in her mind, so on one side she keeps on believing whatever her husband is asking her to believe, to hide his sin, but on the other side she also wants to clear her doubt at once or whatever she is doubting on, should be proven.

Any married woman in such a mental dispute is emotionally highly vulnerable as she is swimming in some unchartered waters. Even after she has proof on her side and her husband too accepts his guilt, at the first instance mostly such women forgive her man just for the sake of saving the family.

This must-have happened to many women you know going through a similar emotional struggle. Despite the male was the reason for disturbing the family’s peace or derailing it, whenever his guilt is exposed, at least for the first time it is the woman who forgives him for a single reason and that is survival of the family.

There may be a few incidents where from this point on the male or the husband understands his mistake and leaves that second woman in his life forever. But what I have seen is that most of the time the guilty husband, once the dust is settled after the initial storm is over and believing that his wife has started to trust him again as before, cheats her again, sometimes reestablishing the illicit relationship with the same woman or sometimes with a new one.

Why men do this? Why he needs another woman when he has a wife at home who loves him like God? My personal experience and also going through that phase of life currently, and even Akarsh of Out of Love too is of the same age group, a man after 40 has this urge to experiment his loving capabilities outside the marriage.

My personal experience suggests that after the teenage, the forties is the best phase a male can have in his entire life. At 40 he probably starts to think that he is as good as a teenager and thus starts to throw his heart here and there and trying to win one while forgetting the responsibilities and integrity towards his family and wife.

And then if another woman or even a girl who is very young than him, tickles this feeling of his, he is bound to get involved in an extra-marital affair.

There are many males who can control such emotions, as these hormonal changes are universal and can happen to any male in his forties, but there are some who can’t control and thinks there is no harm in having an affair and they can control it easily.

It is not that in every case that the married male having an affair is not having healthy life his wife, or she is not beautiful or helpful or not understanding him or not feeding his needs, it is just that he wants this adventure to happen in any case, as this is probably the last decade of his life where he can enjoy the physical pleasures and before he starts to become an oldie.

It is not that while having an affair these males want to ignore their wife or family, not at all. They actually want both the ‘houses’ in order, they want both the ladies to remain happy, but then very few have been successful in handling such a peculiar situation.

There are males whose enthusiasm for an affair fizzles out when they realize that their family will be in pieces if they do not go back to them. In general, such males are actually not serious with the female they are having affair with.

Let us come back to the issue of the woman who has been cheated by her life partner. In few cases, like is shown in Out of Love, that a wounded woman can go to any extent to take revenge on her husband once she has decided to take one, especially when she finds that the husband is still cheating on her despite he made the promise when got caught the first time.

Meera of Out of Love even sleeps with her neighbor who is also Akarsh’s Chartered Accountant just to get the real picture where Akarsh is using all her hard-earned money. In reality, at least in my belief, there can be very few women who can go to such an extent just to take revenge on her husband.

But one can imagine her situation she is in and that is that her back is on the wall and when you find no way to get the way out of a particular situation that is threatening your very existence, a woman can go to any extent.

She may not take the boldest possible step Meera took, but she may start plotting against her husband. She may start getting proof of her husband’s cheating in the ways best possible to her so that when she claims for a separation in the court of law, this evidence might come helpful to her.

A woman, who has been cheated by her husband not once but more, can take the help of her friends to expose him and this is where a friend’s duty has utmost importance, especially if the friend is male. While going through such a phase a woman is emotionally disturbed as well.

She has been hurt emotionally by the one whom she loved madly for years with her utmost dedication but yet that person has breached her trust. So there are chances that such a woman may be thinking of having a real love someday from someone, no matter who is he, just to have a feeling that she can fight this battle with someone’s real love. Being her male friend and a close one, she may in her current emotional status inclined towards you. There is a minor possibility for that to happen, but there is one.

So if you are her male friend then make your mind strong that you will not use her emotions to your benefit, nor you allow her to fall for you, just to get emotional support. There are chances that in past, she was your love and you still love her despite married to someone else, but even then you need to support her the way a best friend should support another.

The possibility is less but if your female friend wants your emotional support just to feel better, you must give it while respecting the limits of your relations. Even your female friend would also not like the same thing to happen to your wife which happened to her.

In Out of Love at the end of the story, Meera decides to live on her own, which is for some a logical end, and for some, it should have been the other way around. In my case, I loved the end of the series, because a woman can forget getting fooled by someone once but not twice.

Yes, she cares a lot about her family and worries about its future as well, but then it is not only she who is duty-bound on this as the husband too is the part of that family and thus the responsibility has to be shared. So if the husband is not sharing that responsibility willfully then it is better to leave him with his luck and the wife must carry on with the rest of the family.

In the end, I want to put two questions to all those husbands who are actually cheating on their wives or just want to have an affair to satisfy their hormonal changes or needs, just ask yourself, what would you have done, if you have found your wife cheating on you? Would you give her a second chance?

Think about these two questions and then follow what your conscience asks you to.

Everyone in my family of four was super excited about this wedding. Not because it was our first ever visit to Goa, but it was going to be our first-ever luxury destination wedding in...

BFF – You have an extra responsibility if you are a male; know why

The concept of BFF (Best Friend Forever) is not new to anyone. One can easily conclude that this concept has come from the west and it is developing well here in India as well....