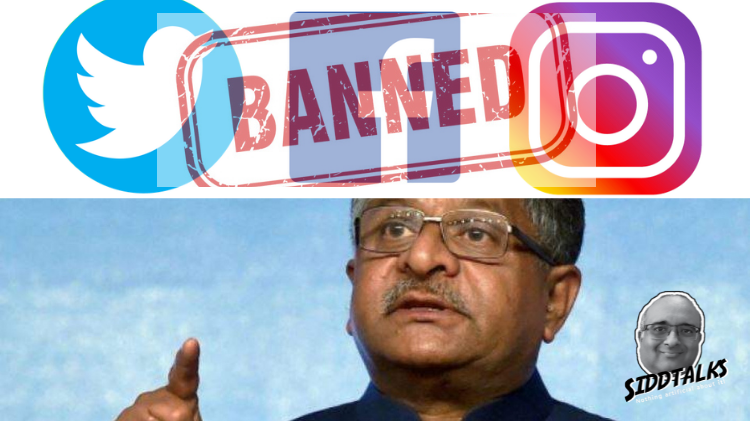 Wondering whether this article that I am writing, after finishing it will I be able to share the same on Facebook or Twitter? It is obvious that such a question does arise in the mind as a ban on these two social media giants along with Instagram is looming large as far as India is concerned. Part of social media users despite knowing that they will lose a big stage, a huge stage where they can pour in their emotions, their views, are happy to have the knowledge about these three social media giants are getting banned most probably by the end of today.

There is also another part of social media users who is angry right now and they fear that ‘freedom of expression is under threat again in India, under the Narendra Modi government. This angry part of the social media users are mostly left-liberals and the supporters of opposition who have only one line agenda and that is to oppose whatever the current government proposes or decides. But the story behind banning these three social media platforms goes beyond happiness and anger. It has something else that one should know to get to the root of the matter.

The date goes back to late January and early February this year, when there was a huge controversy, erupted about the web series ‘Taandav’ which was released on the Amazon Prime OTT platform. As it has become a norm to hurt the religious sentiments of the majority Hindu community of India while making a web series, Taandav too was no different. There were certain scenes and dialogues which were blatantly anti-Hindu. The OTT platform after strong opposition by the Hindu community on social media and otherwise had to withdraw the web series first and if not wrong they released it again after deleting those controversial scenes.

But this time both the Hindu community and the Government of India were in no mood to let things go just like that. It has been a continuous practice to insult Hindus, their beliefs, and their Gods in the name of freedom of speech in most of the web series telecasted till today. If there is no hurting of sentiments then there are scenes or dialogues where the Hindus are shown in poor light in comparison to other religious communities. So the IT department of the central government came out with certain rules.

These rules mostly direct all the OTT platforms and Social Media platforms to adhere to the rule of the land and face the law if any of the rules are breached. All these happened in February this year and the deadline given to comply with these rules was yesterday that is 25th of May 2021. Between February and today, plenty happened in India as the second wave of COVID-19 and assembly elections conducted across the country.

The second wave was deadlier than the first one and people took the help of these social media to get much-needed injections and oxygen bottles and many of them got helped too. That was not a problem, but the problem came only when the results of assembly elections were declared and there were incidents of violence in the state of West Bengal. A few weeks after this, an alleged toolkit came into the picture which was allegedly prepared and circulated by the Congress IT Cell. This alleged toolkit asked the Congress leaders, its volunteers, and supporters to put a dent in the image of the Government of India, Prime Minister Narendra Modi, and also the ruling Bharatiya Janata Party or the BJP, across the world for (according to that alleged toolkit) inaction to fight the second wave of COVID-19.

There were certain directions also given in that alleged toolkit, like secure beds in the hospitals which are ‘Congress supportive’, and thus it should look in the public domain that the government isn’t doing anything and letting people die. This was a serious allegation put forward by the BJP on Congress while posting the photographs of the toolkit on all the major Social Media platforms. Congress in response first filed an FIR against major leaders of the BJP.

But later big Congress leaders and their supportive journalists, who always demand to call themselves neutral, asked Twitter to flag those Tweets which are tweeted by the leaders of the BJP having information of that alleged toolkit. Twitter was quick to oblige and within no time it flagged the tweets of BJP spokesperson Sambit Patra and its National President JP Nadda’s tweet as ‘manipulated media’.

This was probably the last straw on the camel’s back as far as the central government’s tolerance is concerned. By flagging the tweets of its national president and the main spokesman, Twitter actually calling BJP which is the main ruling party a liar! This certainly can’t be tolerated as no party can accept such allegation that too when it was reported by their staunch and known opponents and not by the public in general. Although the deadline of today which was given three months back is just a coincidence with this episode but left-liberals and the opposition parties are trying to connect both the incident to gain some benefits.

If you see the history of Social Media the world over, most of them are following the left-liberal ideology. Nationalists or the right-wingers have always got the rotten part of the pie when it comes to a level playing field. Apart from this Facebook and Twitter in particular act as super-government in most of the countries. Imagine if they can ban the outgoing President of the United States of America then who are we the common people who are fighting for the respect of our religion, our nation, and our sentiments attached to them? Plus Twitter has a history of banning those who are not in line with its political ideology without giving any reason and it remains unanswerable afterward.

In past, there are plenty of incidents where both Facebook and Twitter have put a blind eye to the propaganda of left-liberal and Congress on their platform but were quick enough to block posts, tweets, or users who are right-leaning. Not only that, but most Social Media platforms also use the tool called ‘shadow banning’. By doing this they don’t actually ban the user which they feel is not good for their comfort, they reduce the reach of that particular user and his posts, and also reduce the number of followers too.

Nobody would have had any problem if all these steps taken by Social Media platforms are just or neutral but they actually look totally and visibly biased against one set of ideology that is where a problem lies. One can see in the trends section of Twitter where it puts a certain fake news check link of a media which is left-liberal but never show the similar fact-checking news if it is done by a nationalist or a right-wing portal. Hence the biased was too much to handle for the nationalists and it looked as if these Social Media platforms are here to do politics and not to provide a platform to express the true feelings of people.

The left-liberals are opposing the possible ban of Facebook and Twitter by arguing that during the COVID-19’s second wave people got helped by posting SOS and thus they shouldn’t be banned. No one can deny that but as one popular Twitter handle ‘Yo Yo Funny Singh’ has suggested a day before, “you can’t call someone papa if he gives you lollypop every day!” So yes Social Media have been a terrific help to acquire lifesaving drugs etc. during these testing times, but that doesn’t mean that it should be allowed to breach the law of the land and keep on doing its politics freely.

What if Facebook, Twitter, and Instagram are actually banned by tonight? It will be a new world from tomorrow morning. Yes for the addicts it will take a few days, weeks, or months to get used to filling the void these platforms might create but then people are now used to enjoy their day without the presence of TikTok and PUBG which were banned on the basis of data breach allegations months back. Soon there will be alternatives to all these platforms and they can be Indian alternatives also. An Indian alternative would at least care about Indian interests and will not rule its users as if it is running a country.

Finally to all those Social Media platforms who are seeking more time since yesterday at the eleventh hour of the deadline is ending, they must ask themselves why they didn’t ask their bosses sitting in the USA when they had time for more than three months. Why should the Indian government believe them that they will not come back even after their desired six months extra period is given with the same request?

If one can see the political angle in all these, the current BJP government is facing huge anger not only from the people in general and the opposition but also from many of its supporters as well for allegedly not handling the second wave of the COVID 19, although health was always a state subject because these supportive Social Media platforms and the mainstream media which is part of their ecosystem, the opposition has been successful in creating this wrong picture.

Apart from that what happened post assembly elections in West Bengal has also angered a good portion of BJP supporters. So by not bending down to the pressure of these Social Media giants and their supportive governments to toe their lines, or by not getting lenient by allowing further six months to comply with the new rules and allowing the ban on Facebook, Twitter, and Instagram to happen from tonight, BJP can at least win back the major portion of its angered supporters, as they want to see a strong government or a decision making government at the center which they used to see pre-COVID era.

But, my gut feeling suggests that the ban will not happen at least for now. If not six months these companies might get time for one more month to comply with the rules. Let’s wait then till tonight.

At least a decade ago I saw ex-Israeli Prime Minister Benjamin Netanyahu become the foreign minister of Israel and also saw Russian President Vladimir Putin become the Prime minister of Russia. Both accepted to...

While I am writing this, Eknath Shinde is still in Guwahati, Uddhav Thackeray is still pleading with Shiv Sainiks to remain with his fold, Maha Vikas Aghadi leaders are still meeting with each other,...

I saw a Facebook post a day before yesterday. It was about Agnipath Yojna, and the soul of that post was that the violent opposition to a policy decision by the government that can...